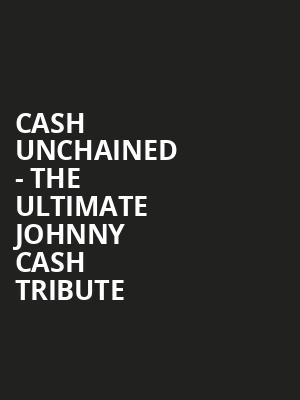 The band has been traveling all over US bringing the sights and sounds of the legendary Johnny Cash.

The outrageous spirit of Johnny Cash lives on in Cash Unchained: The Ultimate Johnny Crash Tribute, and surprisingly, it's thanks to a 20 something frontman named James Tamelcoff III. Capturing the essence of the Man In Black's trademark growl with his own rich baritone, Tamelcoff performs hits from throughout his career, from the early days with Sun Records' Sam Phillips to the later years with Rick Rubin and American Recordings.

Backed by a band of fine musicians that elicit the driving rhythms of Cash's own backing band the Tennessee Three, Tamelcoff may not be Cash's spitting image, but somehow channels the same sense of rock and roll swagger and true grit. One of the finest Cash tributes touring the world currently, the outfit need not rely on costumes or cheap gimmicks, favoring musicianship and passionate performances above all.

You may be required to have had a COVID vaccine in order to attend this performance or show proof of a negative test. Please contact the venue directly for more information on this.

About Wilmington Theater: We are an independent show guide not a venue or show. We sell primary, discount and resale tickets and prices may be above or below face value.

View all times and dates

Sound good to you? Share this page on social media and let your friends know about Cash Unchained - The Ultimate Johnny Cash Tribute at The Queen.